Since mid of 2019, CAMELOT2 has replace the previous common use instrument CAMELOT. CAMELOT2 (from in spanish ‘CAmara MEjorada LIgera del Observatorio del Teide’) is the common user instrument of the IAC80 telescope, at the Teide Observatory. The IAC80 telescope has 82 cm of aperture and at its cassegrain focus is placed CAMELOT2, an instrument with a detector made by Spectral Instruments. It is a 4kx4k back illuminated CCD which operates in the optical wavelength range. It has a huge collection of filters which includes SDSS griz, Johnson UBVRI, Strömgrem uvby standards and many narrow filters. The pixels size is 15 μm which implies a pixel scale on-sky of 0.322 arcsec/pix. The theoretical field of view must be 22 x 22 arcsminutes² but, due to the vignetting caused by the filters, the useful field (squared) of view is 11.8 x 11.8 arcminutes².

From 2009 we are publishing the CAMELOT data at the Virtual Observatory service. These images, already reduced and astrometrized, are now available to the general user. Requests can be done using the standard VO tools, as Aladin or Topcat, or using our own Server Query Form.

As a result of having recicled CAMELOT’s filter wheel, a vignneting appears in CAMELOT2 images, reducing its field of view. In the image below, an example is shown. 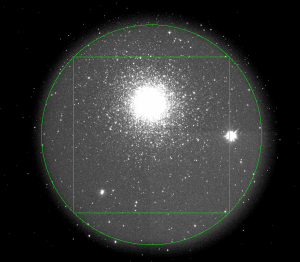 The figures below shows the linearity of the CCD for the 5 readout speeds. The dynamic range of the CCD and the recommended flat count in each readout speed is set from these figures. 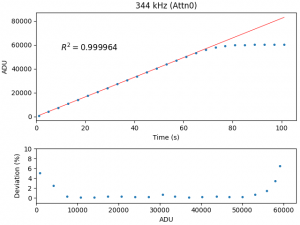 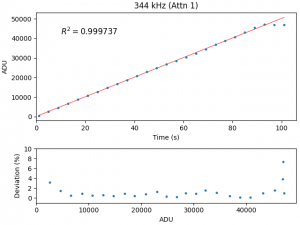 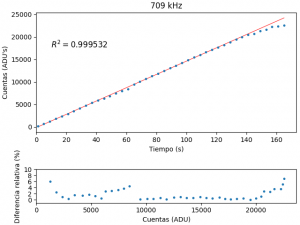 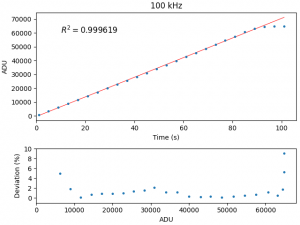 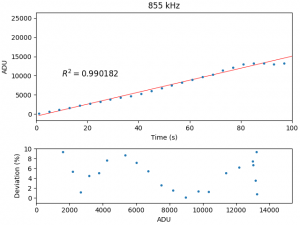 The gain and the RON (readout noise) can be know from each night calibration images (bias and flat) for each readout speed. It can be done with the following equations: 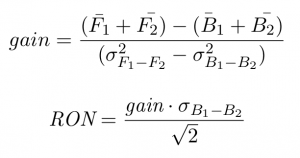 They need a pair or flat images and a pair of bias images. The results for the 5 readout speeds, for the 4 channel readout mode are in the following table:

This values are computed with the media of the results for each of the four channels.

Althought the CCD is cooled to -105ºC, a test of the darkd calibration images are perfomed. It is only teste in 344 kHz Attn 0 readout speed. 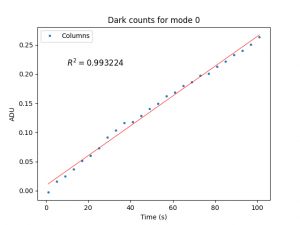 The shutter is the mecanishm tha allows light to pass or not. In Camelot2, it is made of leafs that open radially. During the time it takes to open and close, it block partially some light. In the figure below is shown the difference bewteen two zones in the unviggneting detector and a zone where firstly reach the light. This effect is visible due to for this test, a strong dome flats lights were used. In a common scenario of astronomical observation, the shutter effect is negligible.

In the next animation is clearly seen how the leafs of the shutter open.

Also, the time that the shutter spend open and close can be found. In the figure below are represented the ADU in each zone versus the time. Is clearly seen the strange behaviour until, approximately, 70 miliseconds, where the open and close shutter effects finish. 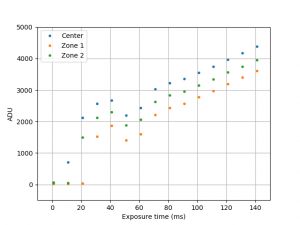 The shape of the PSF (Point Spread Function) along the detector is revised. As is clearly seen in the figure below, the stars begin to appear elongated as they approach to the lower left corner of the detector. 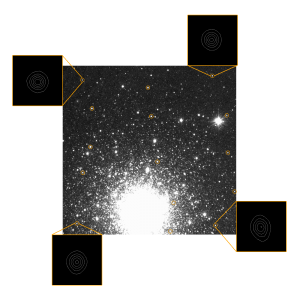 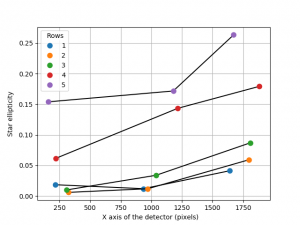 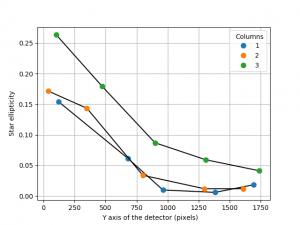 Finally, the ellipticity along both axis can see in better way plotting they in a 3D plot. 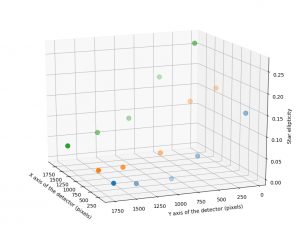 This anomaly is due to a king of misalignment in the optical path that will be fixed in the future.

To estimate the empirical S/N from CAMELOT2 images, the following equation can be used:

Where flux is the noise-subtracted flux contained into a circular aperture, gain is the one corresponding to the CCD mode used, rad is the radius of the aperture, bgr is the background estimation from sky, and ron, the read-out noise of the CCD mode used. Flux, rad, and bgr can be obtained with the keystroke ‘r’ in IRAF/imexam.