This scheme has been discontinued. No call for proposals under the framework of IACNordic collaboration will be issued.

<What comes next is obsolete information. It is included here for historical reasons and in case that authors need the full text of the Acknowledgements for papers containing data obtained via this collaborative time.>Following the Agreement between IAC and NOTSA for the continued operation of the Nordic Optical Telescope, 5% of the observing time at NOT will be offered for joint IAC-Nordic research programs: this will be known as the IAC-Nordic Observing Time. This observing time is aimed at reinforcing the collaboration and synergies between the IAC and the Nordic communities through joint programmes. This time will consist of 7 or 8 nights per semester. IAC-Nordic will be offered twice per year through special calls for proposals (typically a few weeks after the standard call for proposals). Different types of programs can be presented – full or half nights, long term observations – but those proposals looking for strong scientific impact by means of collaboration and synergies between both communities during long periods will be more valuated. The observations will be in visitor mode. Owing to the special nature of the observing time, the conditions for its use differ from those of normal TAC time. Some of the features of IACNordic are listed below:

Proposals will be evaluated by a joint CAT-Nordic committee.

How to submit IACNordic proposals 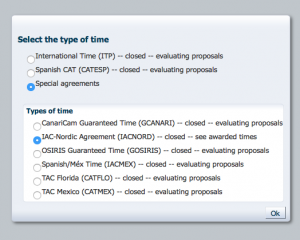 The proposals must be prepared using the appropriate templates. See how to submit if you need further help on the CAT application tool.

Any publications originating from this kind of observing time shall include an acknowledgement along the following lines: “Based on observations made with the Nordic Optical Telescope operated on the island of La Palma by NOTSA in the Spanish Observatorio del Roque de los Muchachos of the Instituto de Astrofísica de Canarias under the joint IACNordic Observing Time programme”.

Since 2021A, this scheme is now active including the GTM (Spanish) or LMT (English). Regular calls will be issued every year.

<What comes next is obsolete information as of 2019. It is included here for historical reasons.> Up to 2.5% of the GTC observing time is reserved for collaborative proposals between Spanish and Mexican astronomers. To send proposals under this agreement, select the corresponding Special Agreement ” Spanish/Mex Time” bullet in the CAT application tool. Spain/Mexico proposals can have either a Spanish or Mexican PI, and must include co-Is from both communities. Proposal due dates coincide with those of the standard call for proposals.

In addition, about 5% of the observing time in all telescopes of Roque de Los Muchachos Observatory and STELLA Robotic telescopes is also offered for International Time Program (ITP), which is allocated by the International Scientific Committee (CCI). Calls for ITP proposals occur once a year.