On the formation scenario of LSBs in a cosmological context, including evidence for stellar/gas/DM expansion:

In this study, for the first time, we investigated the origin of massive Low Surface Brightness (LSB) galaxies, which we were able to reproduce within hydrodynamical cosmological simulations from the NIHAO suite. The simulated and observed LSBs share similar properties, having large HI reservoir, extended star formation histories and effective radii, low Sersic index and slowly rising rotation curves. The formation mechanism of these objects was explored: simulated LSBs form as a result of co-planar co-rotating mergers and aligned accretion of gas at early times, while perpendicular mergers and mis-aligned gas accretion result in higher SB galaxies by z=0. The larger the merger, the stronger the correlation between merger orbital configuration and final surface brightness. While the halo spin parameter is consistently high in simulated LSB galaxies, the impact of halo concentration, feedback-driven gas outflows and merger time only plays a minor-to-no role in determining the SB. Interestingly, the formation scenario of such `classical' LSBs differs from the one of less massive, Ultra-Diffuse Galaxies, the latter resulting from the effects of SNae driven gas outflows: a stellar Mass of 109 solar masses thus represents the transition regime between a feedback dominated to an angular momentum dominated formation scenario in the LSB realm. Observational predictions were offered regarding spatially resolved star formation rates through LSB discs: these, together with upcoming surveys, will be used to verify the proposed emergence scenario of LSB galaxies. 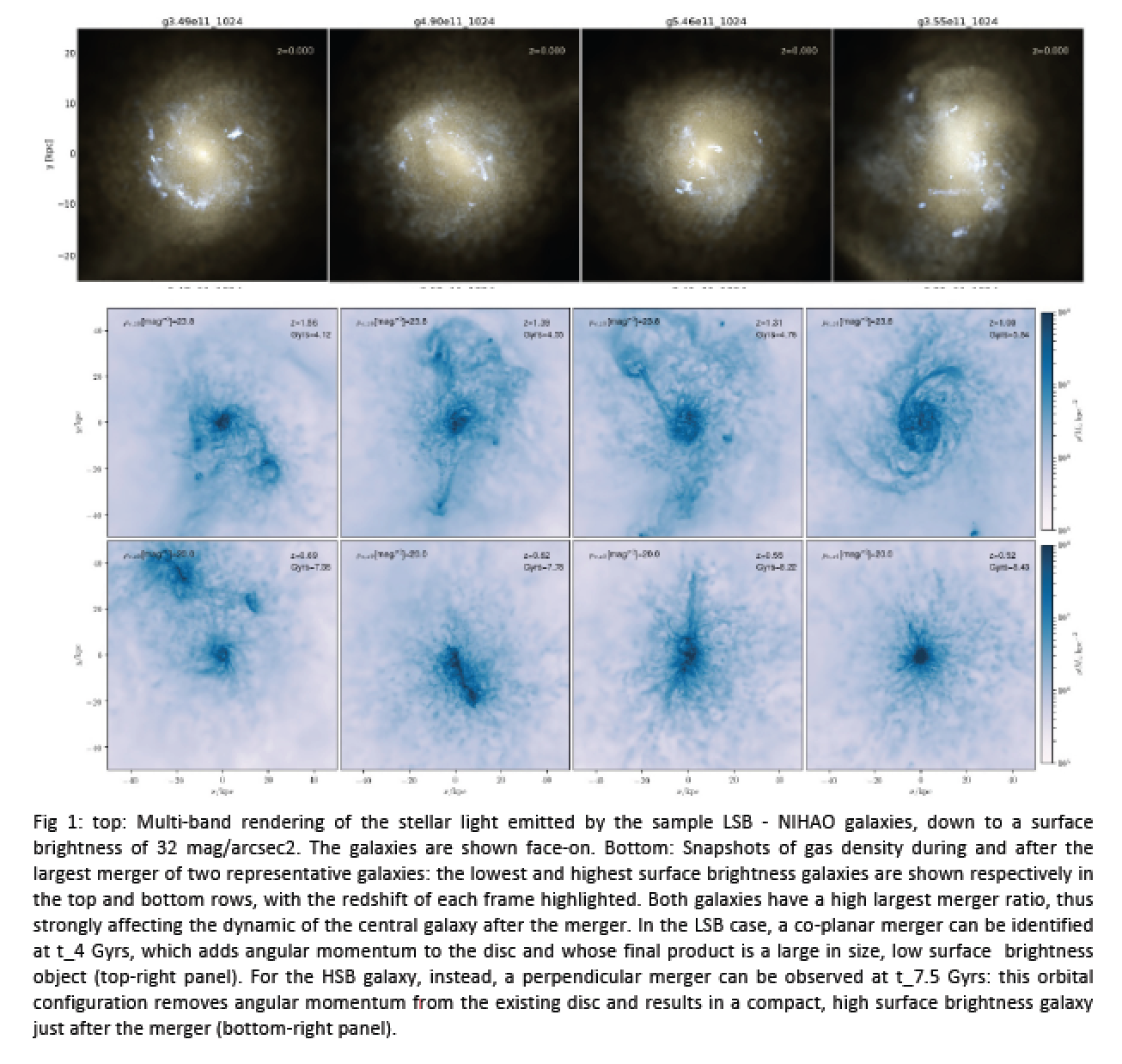 On the morphology, rotation and kinematics of UDGs:

In this work we addressed the topic of kinematical properties of UDGs by analyzing the stellar kinematics of isolated UDGs formed in the hydrodynamical simulation suite NIHAO. We constructed projected line-of-sight velocity and velocity dispersion maps to compute the projected specific angular momentum to characterize the kinematical support of the stars in these galaxies. We found that UDGs cover a broad distribution, ranging from dispersion to rotation supported galaxies, with similar abundances in both regimes. The degree of rotation support of simulated UDGs correlates with several properties such as galaxy morphology, higher HI fractions and larger effective radii with respect to the dispersion supported group, while the dark matter halo spin and mass accretion history are similar amongst the two populations. We demonstrated that the alignment of the infalling baryons into the protogalaxy at early z is the principal driver of the z=0 stellar kinematic state: pressure supported isolated UDGs form via mis-aligned gas accretion while rotation supported ones build-up their baryons in an ordered manner. Accounting for random inclination effects, we predicted that a comprehensive survey will find nearly half of field UDGs to have rotationally supported stellar disks, when selecting UDGs with effective radius larger than 1 kpc. 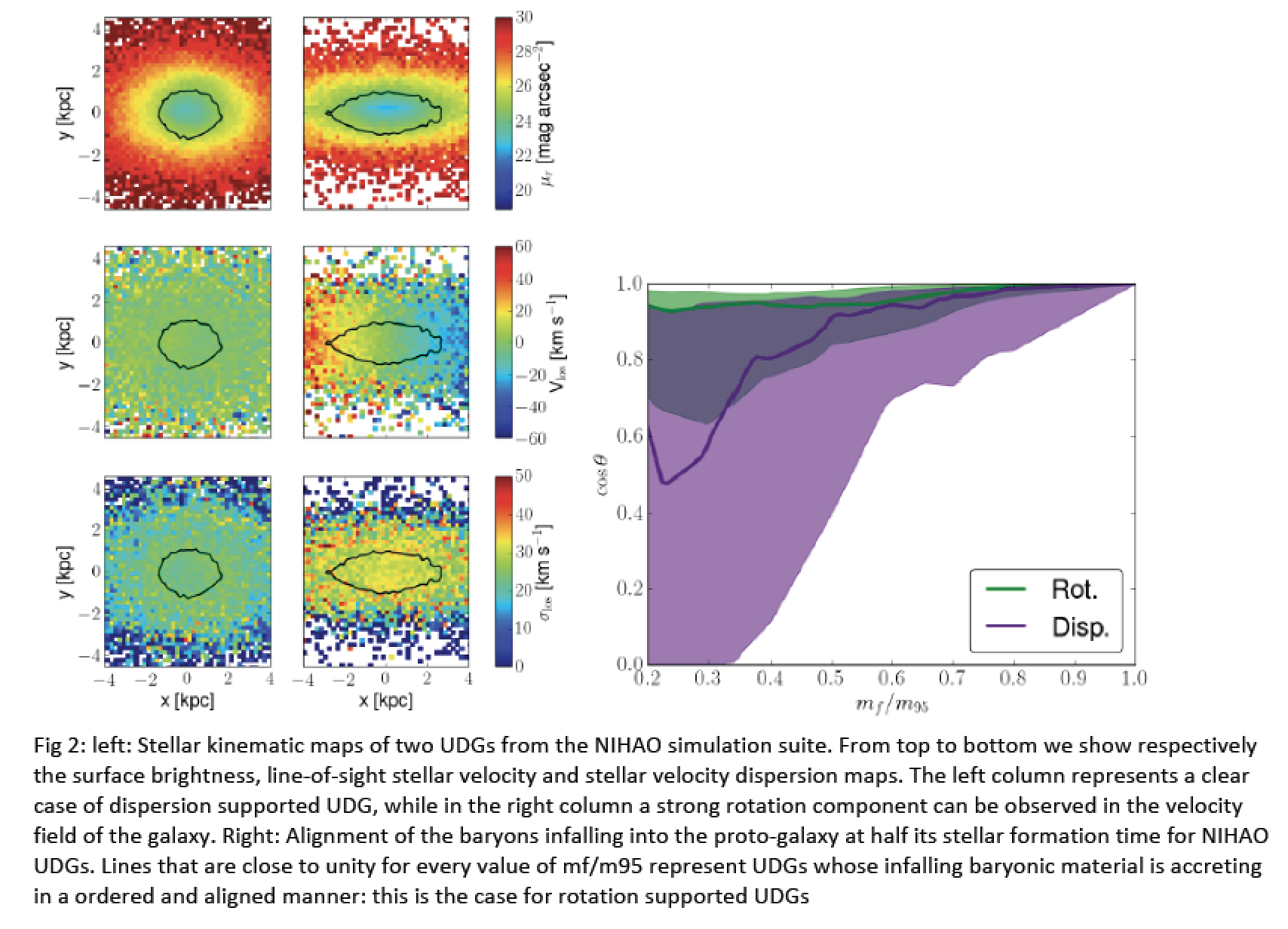 The claimed detection of a diffuse galaxy lacking dark matter (van Dokkum et al, 2018) represents a possible challenge to our understanding of the properties of these galaxies and galaxy formation in general. Such galaxy, already identified in photographic plates taken in the summer of 1976 at the UK 48-in Schmidt telescope, presents normal distanceindependent properties (e.g. colour, velocity dispersion of its globular clusters). However, distance- dependent quantities are at odds with those of other similar galaxies, namely the luminosity function and sizes of its globular clusters, mass-to-light ratio and dark matter content. In this work we haved carried out a careful analysis of all extant data and showed that they consistently indicated a much shorter distance (13 Mpc) than previously indicated (20 Mpc). With this revised distance, the galaxy appears to be a rather ordinary low surface brightness galaxy (Re=1.4 kpc; M*=6.0x107 Msun) with plenty of room for dark matter (the fraction of dark matter inside the half mass radius is >75% and Mhalo/M*>20) corresponding to a minimum halo mass >109 Msun. At 13 Mpc, the luminosity and structural properties of the globular clusters around the object are the same as those found in other galaxies. 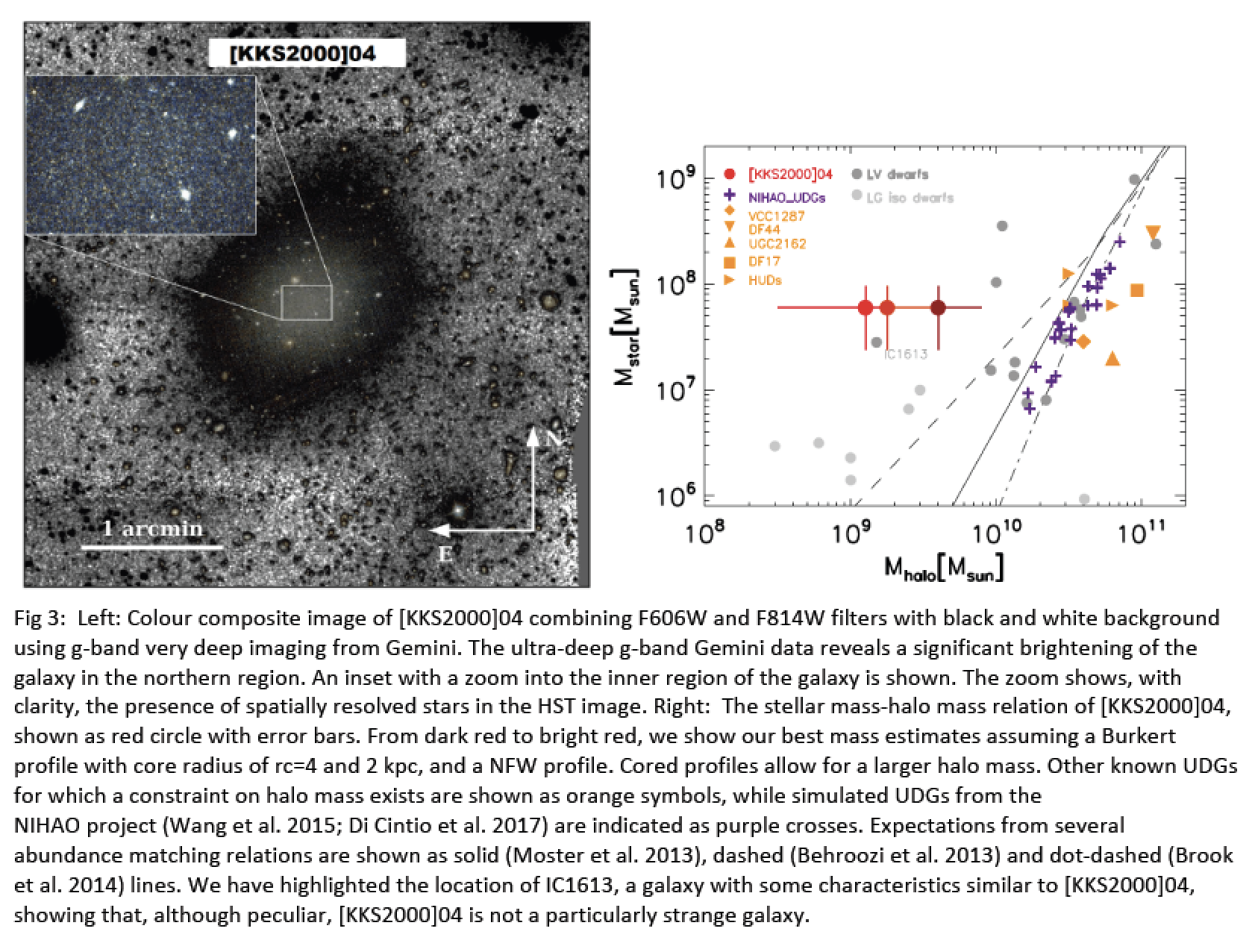 On the stellar populations, age and metallicity of LSBs/UDGs:

Understanding the peculiar properties of ultra-diffuse galaxies (UDGs) via spectroscopic analysis is a challenging task requiring very deep observations and exquisite data reduction. In this work, we have performed one of the most complete characterizations of the stellar component of UDGs to date using deep optical spectroscopic data from OSIRIS at Gran Telescopio CANARIAS (GTC). We have measured radial and rotation velocities, star formation histories (SFHs), and mean population parameters, such as ages and metallicities, for a sample of five UDG candidates in the Coma cluster. From the radial velocities, we confirmed the Coma membership of these galaxies. We find that their rotation properties, if detected  at all, are compatible with dwarf-like galaxies. The SFHs of the UDG are dominated by old (∼7 Gyr), metal-poor ([M/H] ∼ -1.1),and α-enhanced ([Mg/Fe] ∼ 0.4) populations followed by a smooth or episodic decline that halted ∼2 Gyr ago, possibly a sign of cluster-induced quenching. We found no obvious correlation between individual SFH shapes and any UDG  morphological properties. The recovered stellar properties for UDGs are similar to those found for DDO 44, a local UDG analogue resolved into stars. We have concluded that the UDGs in our sample are extended dwarfs whose properties are likely the outcome of both internal processes, such as bursty SFHs and/or high-spin haloes, as well as environmental  effects within the Coma cluster.

A full list of publications related to the project can be found here: