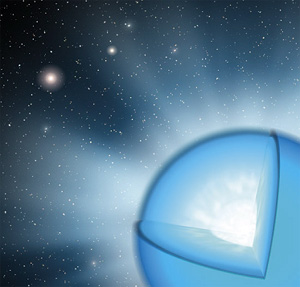 Massive stars have been many times claimed as Cosmic Engines and Gifts of Nature for the study of the Universe, from the Solar neighbourhood to the far distant star forming galaxies.

Along their fast and complex lifes, massive stars pass through different evolutionary stages which include the most extreme and exotic stellar objects known in the Universe (e.g. hyperenergetic supernovae, O-type and Wolf-Rayet stars, blue and red supergiants, luminous blue variables, massive stellar black holes, neutron stars, magnetars, massive X- and gamma-ray binaries). Also, they are the origin of new studied phenomena -- such as the long duration gamma-ray bursters, or the gravitational wave emission events associated with the merging of two massive black holes o neutron stars --, and have been proposed to be key players in the epoch of reionization of the Universe.

From a practical perspective, massive stars have become reliable indicators of abundances and distances in external galaxies, even beyond the Local Group. In addition, the interpretation of the light emitted by the so-called HII regions and starburst galaxies rely on our knowledge of the effect that the strong ionizing radiation emitted by blue massive stars have on the surrounding interstellar medium. Last, but not least, massive stars are key ingredients for the investigation of the chemodynamical evolution of galaxies and the process of star formation itself.

Ensuring reliable knowledge of the physical properties, evolution, and feedback of massive stars is of utmost importance for several topics at the forefront of modern Astrophysics.

In spite of the remarkable avances in the modelling and spectroscopic analysis techniques of these stars occurred in between the last decades of the XXth century and the first years of the new one, our knowledge of these important (but complex) astrophysical objects were limited to conclusions extracted from the analysis of single-epoch, medium resolution, spectroscopic observations of relatively small samples. This was probably introducing biases in our conclusions and certainly leaving important puzzling questions still unresolved. To step forward in this field, it became crucial to increase the number of analysed objects the Milky Way and other metallicity environments, also considering the information provided by multiepoch photometric, spectroscopic (multi-wavelength) and spectropolarimetric observations. Only such a complete observational dataset will allow the investigation of the impact that third order parameters (such as binarity/multiplicity, magnetic fields, and stellar oscillations) have on the physical and wind properties of massive stars, as well as the evolution of this important astrophysical objects.

Slowly but surely, this situation started to improve by the first decade of the XXIst century thanks to the intensive observational efforts devoted by several groups around the globe which -- condensated in several specific spectroscopic surveys -- allowed the compilation and analysis of large samples of  different types of massive stars in the Milky Way and other close-by galaxies in the Local Group.

IACOB is an ambitious long-term observational project which is contributing to the new era of investigation of massive stars by concentrating on Galactic OB stars. More specifically, the main scientific goal of the IACOB project is to provide a complete empirical overview of the physical properties of a statistically significant sample of OB stars. In particular, the ultimate driver of the project is that the compiled information can be used as a strong and long-lasting anchor point for our theories of stellar atmospheres, winds, interiors and evolution of massive stars.

In this endeavour, we are benefiting from: [1] optical, high-resolution spectroscopic facilities attached to 1-3 m telescopes in the Canary Islands observatories; [2] state-of-the-art tools and techniques to perform single snap-shot and multi-epoch quantitative spectroscopic analyses (providing accurate estimates for the stellar/wind parameters, rotational velocities, abundances, as well as information about stellar phenomena giving rise to spectroscopic variability such as binarity, pulsations, rotational modulation, and wind variability); [3] parallaxes and proper motions provided by the Gaia mission; and [4] photometry provided by the TESS space mission.

Some more immediate drivers of the project are:

(2) increasing the statistics of Galactic OB stars with accurate physical parameters and abundances;

(3) exploiting this database to investigate open and new questions in our knowledge of the physical properties and evolution of massive stars (e.g., the actual masses of these stars, the nature of the O Vz stars , the driving mechanism of stellar winds in the weak wind regime, the uncertain stage of B supergiants in an evolutionary context, the actual rotational velocities of massive stars, the physical origin of the macroturbulent broadening , and the impact of rotation/binarity/pulsations on the evolution of massive stars);

As a plus, we are providing an unique ground-based spectroscopic database supporting/complementing the observations delivered by the Gaia , IUE , HST and TESS space missions in the OB star domain.