Three of such science cases are of particular interest for IAC researchers, and are briefly presented below. The IAC team continues quantifying the HARMONI performances for these science cases and results have been presented in several international meetings (see publications and contributions to conferences section).

Black holes mass and relations with the host galaxy

Almost all galaxies have a super massive black hole (SMBH) in their nuclei. Both theoretical and observational studies have established that the large-scale properties of galaxies (e.g bulge mass, bulge luminosity, stellar velocity dispersion, etc) scales with the mass of its central black holes (e.g. Magorrian et al. 1998, Gebhardt et al. 2000, Ferrarese & Merritt 2000, Marconi & Hunt 2003, Beifiori et al. 2012, Kormendy & Ho 2013, McConnell & Ma 2013, Sheinis & López-Sánchez 2017 and references therein). These relationships point to a connection between the growth of the SMBH and the way its host galaxy evolves: a co-growth scenario for galaxies and their central black holes. The optical spectral (rest-frame) range offers all the needed observational features to derive the involved parameters.

An important piece of information comes from the evolution of such relations over cosmic time. Knowing this would provide key constrains to discern between different (co-)evolution scenarios. Specifically, the cosmic star formation history and the AGN population peak somewhere between redshift 1.5 and 2. At these distances the optical spectral features needed to explore the BH-host galaxy relations fall within the spectral range covered by HARMONI. We are exploring the potential of this instrument to unveil the co-growth of SMBH and their host galaxies. 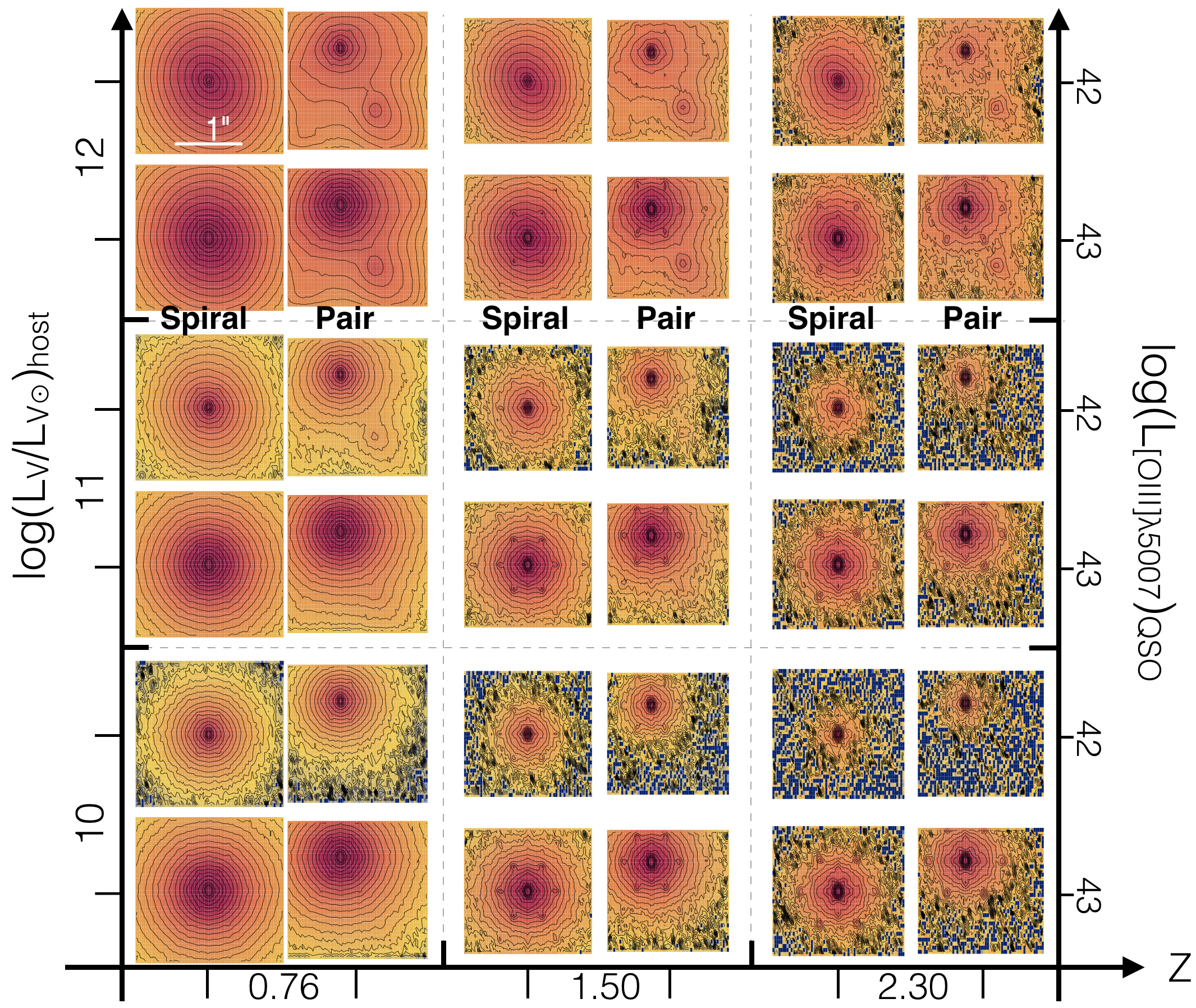 Fig 1: General view of simulations of HARMONI observations for QSO+host at redshifts 0.76, 1.50 and 2.30 (X-axis). Left-Y-axis corresponds to host galaxies luminosities and right-Y-axis indicates central QSO luminosities. As input for the simulations we combined MUSE observations of two nearby galaxies (i.e. NGC7119A/B-pair of galaxies in interaction and a barred galaxy - PGC055442) and a theoretical QSO spectrum which were dimmed and redshifted to the desired cosmic epoch. Simulations were performed for the 30x60 mas2 HARMONI spatial scale, LTAO working with 0.67 arcsec seeing and low spectral resolution (i.e. R=7000).

The spectroscopic study of resolved stellar populations to determine the chemo-dynamical properties of galaxies and their components is fundamental in order to fully constrain their formation history and evolution. By investigating galactic systems on a star-by-star basis, coupling the information on the star’s line-of-sight kinematics and chemical abundances with the star’s relative age, it is possible to reconstruct the galaxy’s chemical enrichment history, the time variation of the kinematic properties of the stellar component (e.g. asymmetric drift), as well as for the individual galaxy components. The resolved stellar population approach provides crucial tools to the toolbox of “galactic archaeologists”, as it provides the possibility of unravelling the complex formation and evolution of galaxies from a very detailed perspective, which goes well beyond the determination of the mean chemical and kinematic properties. For example, it is in the distribution function of chemical abundances that the information on the chemical enrichment history of a galaxy from the earliest times to present-day is encoded; while the distribution of the stars’ line-of-sight velocities informs us on the angular momentum content, gravitational potential and possible accretion events. Such information can be gathered for individual galactic components (disc, halo, spheroid), which are thought to follow different evolutionary paths.

The study of evolved low-mass stars such as red giant branch (RGB) stars is of crucial importance: low-mass stars can have lifetimes longer than a Hubble time and thus act as “living fossils”; and stars from the earliest star formation episodes to those 1-1.5 Gyr ago are all expected to evolve as bright red giant branch (RGB) stars. With current instrumentation on 8m-10m class telescopes, (low/intermediate resolution) spectroscopy of resolved RGB stars is possible within our own Local Group. While this hosts a very sizeable sample of dwarf galaxies of different types, it does not host any large elliptical and only a couple of small (M33 and the Large Magellanic Cloud) and large disc galaxies (the Milky Way & M31). Making such studies possible within a volume of 4Mpc is a fundamental step to understand the formation history of particular systems like a large elliptical galaxy (Centaurus A, hereafter CenA) and to contrast the evolution of Local Group disc galaxies to those in other environments (e.g. the Sculptor group).

Spectroastrometry of the broad line region of lensed quasars